The Betrayed, The Neglected

In late February I climbed off a plane in Tan Son Nhut airport, to set foot for the first time in 38 years on the soil of Viet Nam.  Many Vietvets have gone back to visit in the last 20 years, some to try to heal themselves, to lay ghosts of their past to rest, to reminisce with other vets on a tour, to show their families where they spent the most intense time of their lives, to enjoy the beauty of the country and its many attractions.

But I did not go halfway around the world for any of those reasons.  I survived the war perhaps better than many of us who served there, I was older when I went, had studied the country and the conflict for years, was in some ways more prepared for the experience.  And I was lucky, I was in battles, saw men die, lost good friends to the enemy, was wounded myself.  But I did not have to endure as much as many others did, and carried home less pain from the war than some others.

There was one pain that only began after I left Viet Nam, and that was the shame that grew over the years after 1968.  It was then that I saw the slow abandonment of the Republic of Viet Nam to the might of a massive Northern conscript army equipped by the Soviets with mountains of supplies, while the ARVN supplies ran lower and lower as Congress choked off the flow year by year.

Many vets recall the ARVN as not being a good ally, and in truth South Viet Nam, its government, and its military had many problems.  There was poor training and leadership in some units, there was corruption in the upper officer corps, there were even VC sympathizers in the ranks, along with drafted men who were not well motivated to fight.  But there were also some really good units, which fought hard, like the Vietnamese Rangers that had part of the line at Khe Sanh beside the Marines.

What only a few US vets realize is how much Tet ’68 changed that.  The violation of the truce and the atrocities that the attacking communist forces made it really clear what kind of war they were fighting, and sympathy for the VC dropped like a stone.  Most Southerners decided that they really did not want to be taken over by the North.  No more Buddhist monks burned themselves up in protest of the war.  Enlistments for the Vietnamese military went up threefold, training got better, weapons supply from the US got better, corruption and incompetence declined.  It took time, but by 1970 when Vietnamization started, it proved possible for the improved ARVN forces to take over the fight as our units left the country, one by one.

And fight they did, there was a major invasion of the South in ’72, nothing remotely guerrilla about it, 200,000 NVA regulars with modern tanks, excellent Russian artillery, and antiaircraft missiles.  Horrendous battles went on for months, including a siege of An Loc that was like the Alamo, except even though the city was largely overrun, the South Vietnamese soldiers hung on like bulldogs and eventually won the day.

In the end, the NVA divisions retreated back over the DMZ and the border into Laos, having taken an incredible 40% casualties.

But politics in America had undercut support for the war, even the material support we’d promised the South.  The ARVN began to run short of spare parts, fuel, medical supplies, and ammunition.  They fought on through ’73 and ’74, with things getting worse month by month.  Eventually, what US indecision and weakness had made inevitable did occur, and Saigon fell.  With it fell a night of suppression, repression, and vindictiveness as the communists broke every promise to “liberate” the South and offer “reconciliation” to those who had opposed them.  Thousands died, hundreds of thousands went to “re-education” camps, other hundreds of thousands went to “New Economic Zones”, and the standard of living fell to one of the lowest in all of South East Asia.  Hunger was rampant, despair was common, and millions of Vietnamese left the country every way they could, even though the risks of even trying to leave were high, and the risks of the journey included an appreciable chance of death.

This was the fault of my own country, which had not kept all its promises to RVN.  And I knew that good people, many, many good people, were paying a heavy price for our failure to support them.  Since I could do nothing about it, I tried hard for years to not think about it too much.

But last year, I heard the stories about the RVN soldiers who could not leave Viet Nam, as some others were fortunate enough to do.  They are marked for their past patriotic service, and suffer various kinds of discrimination that makes life more difficult.  And of these, the worst off are the disabled ones, those veterans who suffered major injuries, lost arms, legs, eyes, hearing, and health.  They receive no pension, there are few if any jobs for them, their lives are terribly hard.  The thought of this suffering, going on for decade after decade under the revengeful Hanoi government, bothered me greatly and I could no longer avoid thinking about it. 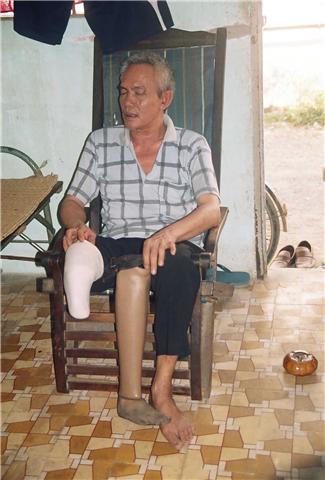 So I went to Saigon, where through the help of some Vietnamese immigrants to the US, I made contact with local people there who would help me do a small survey of disabled RVN veterans.

And over several days I met 21 of these men, saw their military papers, their broken bodies, the tiny apartments or shacks they live in, and heard their stories through an interpreter.  One man is blind, missing a leg, deaf in one ear, living all alone in a bare concrete room no bigger than the walk-in closet of a nice house in Raleigh, dependent on friends to keep him from starving.

Another lives with a wife and child in a shack he built in an alleyway, where the authorities could throw them out any time, and scrapes out a very bare living doing repairs on the street to motorbike tires. 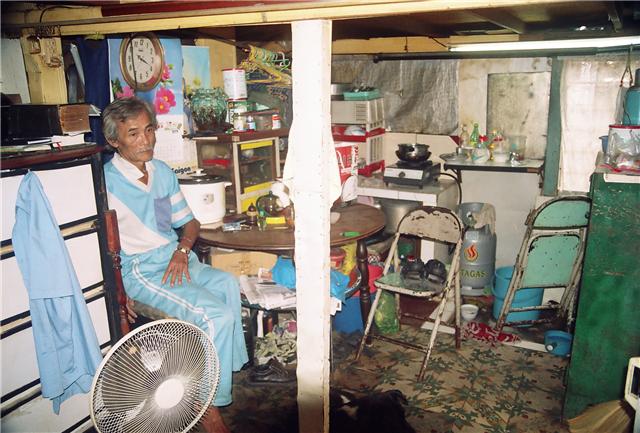 Still another is missing both legs just below his hips, has one arm partially paralyzed, cannot speak well any more, and lives in a shack with a scrap metal roof on the edge of the river, with his wife and children taking care of him and selling vegetables from the river to support them all. 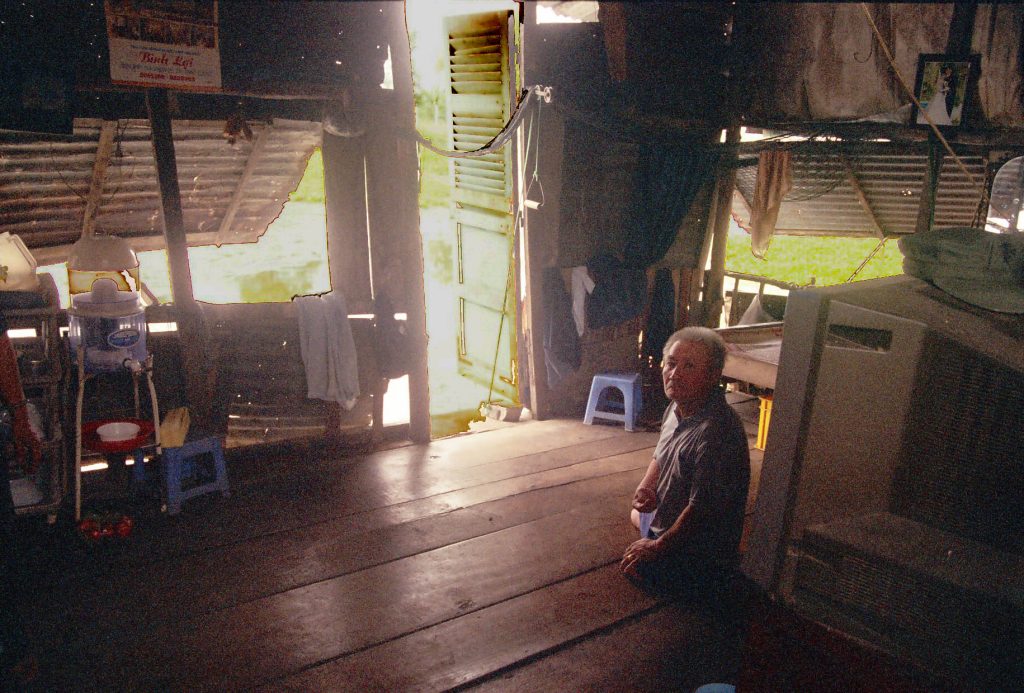 I gave away all the money I brought to Viet Nam, and sent home and got more money from my family and some Vietnamese friends and gave that away too.  We got one man a wheelchair, another a cart so he can sell lottery tickets, arranged some house repairs for a family whose home was flooding all the time.  We gave everyone at least 500,000 dong ($32), which will help them for a little while with food, medicine, maybe some rent.  It was not enough, but it was all we could do, and it will help for a while.  And the men thanked me, sometimes with tears in their eyes, not only for the money, but as one man (with no legs) said, “We have been forgotten and disgraced in our own country for over 30 years, and now someone comes to see me and try to help.  The money is important, we need it badly, but to me it is more important that I am remembered, that somewhere I still have honor.”

Those 21 men are just a tiny fraction of all the disabled veterans in the South.  Over 2 million men served in the RVN forces, and many thousands of those became disabled.  There is no doubt that any search for disabled veterans will find plenty of them, starting around Saigon and then going into the countryside, and into every other city in the South.  They are the saddest victims of the war, they and their families have suffered and keep suffering, even more now as they get older and their health declines.  I wish I could make the antiwar activists, who were so proud of supporting the North and disrespecting American vets, go and see what they really helped achieve.

I am American and these men are Vietnamese, but we shared in the fight for freedom, and I feel we are related somehow.  They are my former allies who are hungry, and sick, and worried every day about how they can go on.  I want to help them, and a small charity has been started, called the Vietnam Healing Foundation, to raise some money for them.  We will do what I can, and the good news is that a dollar goes a long way in Viet Nam. I will go back again, to find more, and give more help.  It will not be enough, but I believe it is an important duty to give something back to these men, the betrayed, the neglected, the forgotten.  To make them feel remembered, and recognized for their sacrifice, and to give them another day’s food is all so worthwhile that I thank heaven for the chance to do it.

Some have said to me “But what about our brothers right here, the American vets who have problems?”.   Heaven knows I support them, and want the VA to do as much for all injured and disabled vets as possible.  But regardless of how imperfect the VA is, for every American vet just living in this country makes him a thousand times better off than the men I saw in Viet Nam.  Sending a few dollars to help those forgotten soldiers will make zero difference to American vets here, but will make an enormous difference to them.  Our politicians betrayed the promises made to South Viet Nam, and we cannot fix that.  But I can try to make a difference, however tiny, for those men who have been treated so badly for so long.